Google parent company Alphabet, Inc has two types of stock that you can buy:

The only difference is that GOOGL stock provides voting power, which gives you a vote in shareholder meetings.

But if you own GOOG stock, then you have no vote at all.

However, both share classes technically make you entitled to an equal amount of the company's earnings.

If Alphabet/Google ever pays a dividend, then both GOOG and GOOGL will pay out an equal amount.

According to Alphabet's annual report for 2018, there were 299 million GOOGL and 349 million GOOG shares outstanding.

What about class B stock?

The third type of stock is class B shares, of which there are 46.5 million outstanding.

These are special shares that can not trade publicly. Each share provides ten votes, meaning they have ten times the voting power of GOOGL shares.

Over 90% of the class B shares are owned by Google founders Larry Page and Sergey Brin, as well as former CEO and chairman Eric Schmidt.

The founders created these different share classes in April 2014. They did this so they wouldn't lose control of the company even if they ended up owning much less than 50% of the company's stock.

With 46.5 million class B shares that give 465 million votes, these individuals currently hold about 61% of the company's voting power.

Because GOOGL (class A) stock owners have voting rights, the shares tend to cost slightly more than GOOG (class C).

However, the price difference is tiny -- often less than $1, which is under 0.1% of the stock price. It also frequently happens that GOOG shares temporarily cost more than GOOGL shares.

What this implies is that the market places very little value on the voting rights you get with the class A shares.

Here's how both types of stock have performed over the past 5 years: 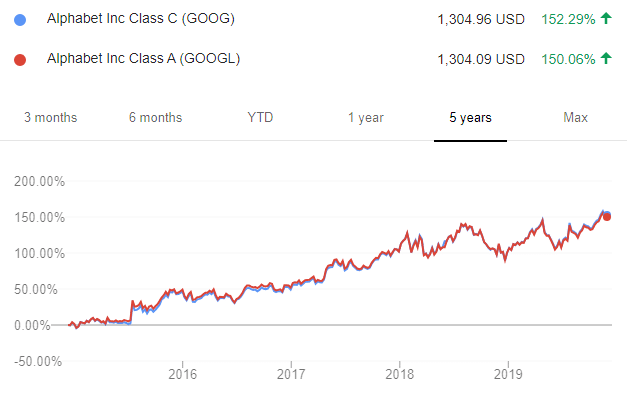 There is no reason why this outperformance for class C shares should continue. Both should have pretty much identical returns moving forward.

Is voting power really that important?

If you buy GOOGL stock, then you will be allowed to cast your vote in shareholder meetings.

However, as a retail investor, the relatively few shares you own means that your vote won't make much of a difference.

This is particularly relevant given that the company's founders and directors own all the class B shares with over 60% of the voting power.

So even though it may feel better to know that you have voting rights, this doesn't really give you much (if any) real power.

Which should you buy?

The only difference between GOOG and GOOGL is that GOOGL (class A) shares provide voting power.

Both GOOG and GOOGL shares are likely to perform the same over time with regards to stock price.

If Alphabet ends up paying a dividend, then both types of stock will pay out the same dollar amount.

So if all you care about is stock price gain or a (possible) future dividend, then it doesn't matter which one you buy.

That being said, I am an Alphabet shareholder, and I personally prefer to buy the GOOGL (class A) stock that has voting power.

To me, stock ownership is about being a part-owner of the company -- and having zero voting power just doesn't feel right.