An organization called the National Bureau of Economic Research (NBER) is responsible for determining when recessions begin and end in the US.

More specifically, a committee within the NBER called the Business Cycle Dating Committee is a group of experts who determine the starts and ends of recessions.

How is a recession determined?

Many people believe that a recession is two consecutive quarters of negative gross domestic product (GDP) growth. If the economy contracts for two quarters in a row, that means the economy is in a recession.

However, this is more accurately called a "technical" recession. It is often used, but the NBER uses a different approach for the US economy.

The NBER defines recessions as significant declines in economic activity that last from a few months to more than one year. They don't only look at GDP, but also gross domestic income (GDI).

In addition, they use some economic data that are reported monthly as opposed to quarterly. This includes industrial production, employment, and retail sales.

Here's what the top five economic indicators used by the NBER represent:

Keep in mind that the NBER does not publish specific numbered criteria for these indicators. But they look at them to determine when the economy is declining.

The normal business and economic cycles are characterized by growth in the economy (termed expansions), followed by periodic declines (called recessions).

The expansions tend to occur slowly over 5-10 years, while the recessions are quick and last for a few months to over a year.

In other words, the recession begins right at the top of the peak and ends at the bottom of the trough, just as the economy starts growing again.

Conversely, the expansion is the time period between recessions. It begins at the bottom of the trough of the economic cycle, then ends at the top of the peak.

The NBER does not give exact dates, but they do say in which month of the year the recession began and ended. For example, the Great Recession of 2007-2009 began in December 2017 and ended in June 2009.

The US economy has been in expansion since then. It is now the longest expansion in modern history.

At the time of this writing, the coronavirus pandemic is likely to end this record-long expansion and thrust the economy into a recession.

The recession may be determined long after it begins

When the start of a recession is officially announced by the NBER, the economy has already been in a recession for many months.

This recession also ended in June 2009, but the NBER didn't officially announce the end until September 2010.

The long delay is understandable because it's impossible to say when the economy reached a peak until many months after it happened. It takes time to see whether a decline is just a temporary reduction in growth or an actual recession.

Usually, the stock market and economy have started to decline long before the recession gets announced. Conversely, they are also well on their way to recovery when the NBER calls the end of the recession.

Here's an overview of the latest peaks and troughs in the economic cycle and the exact dates they were officially announced by the NBER: 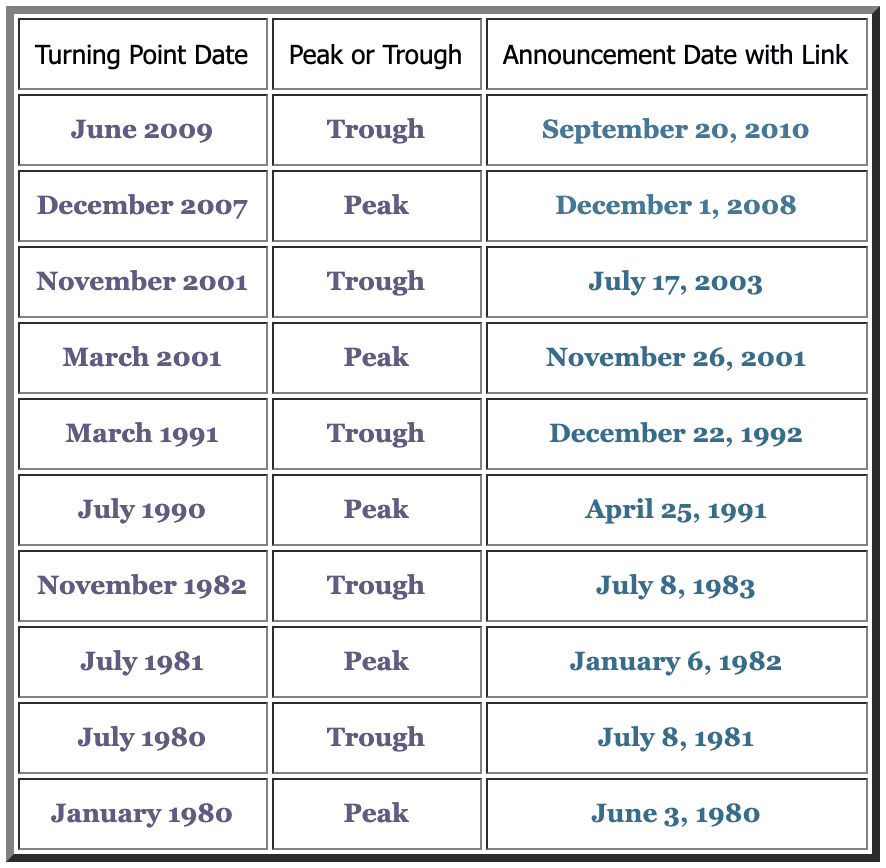 The official announcements by the NBER have historically lagged behind the beginnings and ends of recessions by 6 to 21 months.

A depression is a very long and severe recession

A distinction is sometimes made between a "recession" and a "depression."

Put simply, a depression is a very long and severe recession. It can last for years as opposed to months.

However, the NBER does not make a distinction between a recession and depression. There are no clear rules about who decides when we are in a depression.

However, some have defined an economic depression as a recession lasting 2 or more years, or a recession with a decline in GDP of more than -10%.

An example of a depression is the Great Depression that started in 1929 and lasted in some form until the late 1930s.

Recessions are about the economy, not the stock market

For example, the stock market reached a peak in October 2007, two months before the Great Recession started, and 14 months before it was announced.