A recession is a widespread decline in economic activity that lasts for at least a few months.

An economic depression is a recession that is either very long, very severe, or both.

Recessions are a normal part of the business cycle and occur every 5 to 10 years, while depressions are rare.

Between recessions and depressions, the economy has always had long periods of growth. The growth phase of the economy is called expansion.

What is a recession? 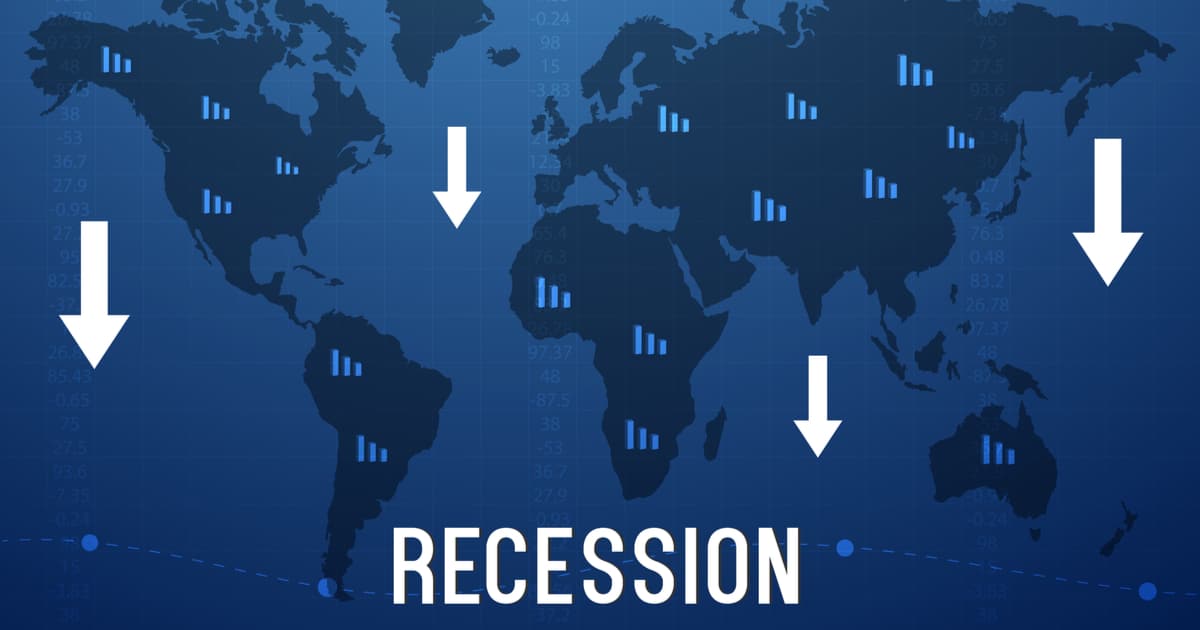 A common rule of thumb to describe a recession is two consecutive quarters of negative gross domestic product (GDP) growth.

However, recessions in the US are defined differently and determined by an organization called the NBER (National Bureau of Economic Research).

The NBER defines recessions as broad declines in economic activity that last for at least a few months.

They look at many different indicators besides just GDP. This includes gross domestic income, unemployment, manufacturing, and retail sales. All of these tend to decline significantly during recessions.

Unlike depressions, recessions are a normal part of the business cycle. They occur every 5-10 years and tend to be about 6-18 months long.

But recessions can vary greatly in length and severity. Some of them cause deep declines in the economy and lead to widespread unemployment, while others are so mild that most regular people barely notice them.

The last two recessions in the US were:

Although the recession in 2001 was mild from an economic standpoint, it was disastrous for the stock market. The Nasdaq index declined 78% from its peak.

Here’s a chart of GDP growth that shows these two recessions:

What is a depression?

An economic depression is a major, long-term decline in economic activity.

It is much more severe than a typical recession, which is considered a normal part of the business cycle.

However, there is no fixed definition of a depression and no organization that is responsible for determining it. The NBER does not declare depressions.

In simple terms, an economic depression is like a mega recession. It is much longer or much bigger than the typical recession that is a normal part of the economy.

Some experts have suggested the following criteria to determine whether a recession is bad enough to be a depression:

The most recent depression in the US was the Great Depression, which started with a massive stock market crash in September 1929. It consisted of two separate recessions in the US, one from 1929 to 1933 and the other from 1937 to 1938.

However, the economy didn’t reach normal levels until 1941, more than a decade later.

The effects on the stock market were devastating. The Dow Jones, which was the main stock market index at the time, ended up declining about 90% from its peak.

Key differences between a recession and depression

The 2007-2009 financial crisis was the most severe recession since the Great Depression. It started in December 2007 and ended in June 2009.

This was a massive economic crisis that had severe consequences all over the world, but it is still not considered long or severe enough to be termed a depression.

Instead, it is frequently referred to as the Great Recession.

It is useful to look at some key differences between the Great Depression and the Great Recession to understand the distinction between a recession and depression:

The Great Recession was really severe and had terrible consequences for people all over the world. But it wasn’t anywhere near as bad as the Great Depression.

Will we ever have a depression again?

Throughout history, there have been many recessions but only a handful of depressions. Importantly, there hasn’t been a depression in the US for 80 years.

The Federal Reserve and other central banks now have very sophisticated tools to stimulate the economy, so it is possible that we will never have a depression again.

For example, the Fed and the US government have responded very swiftly to the economic effects of the coronavirus pandemic.

They have learned from the mistakes of the past and will do anything in their power to prevent the economy from going into a depression.

It remains to be seen whether their efforts end up being successful. Time will tell.

Stock Analysis Pro
Unlimited access to all our financial data with up to 30 years of history.
Stock Screener
Filter, sort and analyze all stocks to find your next investment.
Watchlists
Keep track of your favorite stocks in real-time.
Market Movers
The stocks that are making the biggest moves in the market.