The income statement is a financial statement that shows a company's revenues and expenses over a specific time period and whether they amount to profits or losses.

It is one of the three core financial statements, the others being the balance sheet and the cash flow statement.

On the income statement, revenue is listed at the top and is often referred to as the "top-line."

All the key costs and expense items are listed below and then subtracted from the revenue. After all the expenses have been subtracted, the profit or loss is listed near the bottom of the statement. The profit/loss is termed the "bottom-line."

Publicly traded companies release income statements for each quarter and each year in their quarterly and annual reports.

Investors and analysts closely follow the income statements of companies because they give a good overview of how different parts of the business are performing.

The income statement also shows how effective the company is at managing its expenses and transforming revenues into profits.

The income statement is sometimes called the profit and loss statement, P&L statement, earnings statement, statement of operations, or some other variation of these terms. 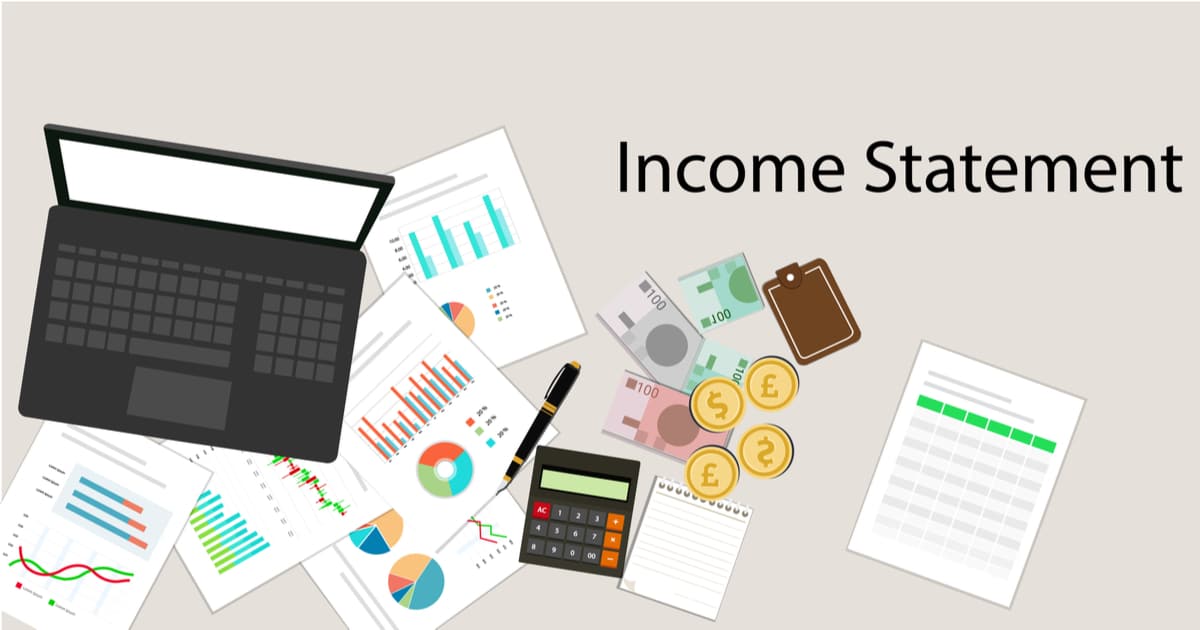 Their reports are called 10Q (quarterly) and 10K (annual). They are sent to the SEC in accordance with generally accepted accounting principles (GAAP).

Here's a quick overview of what the three core financial statements are for: 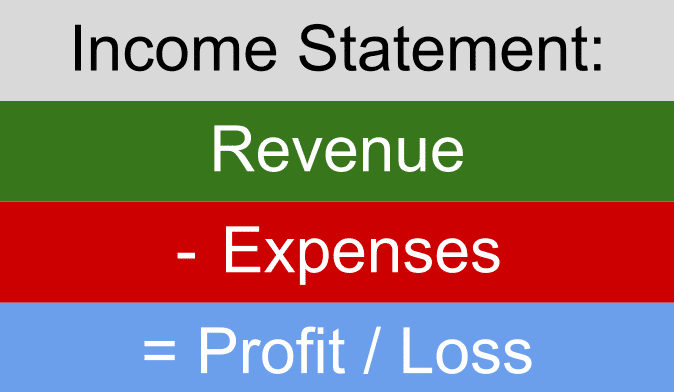 The income statement shows how revenue and expenses ultimately amount to profits or losses for a company.

But this calculation involves many different line items. The income statement shows how each line item for revenue and expenses contributes to the bottom line.

In addition, there are often non-operating gains and losses included in the income statement. This is money that the company gains or loses that is not related to the core business. Examples include profits from selling an asset or losses from a lawsuit.

Although income statements may seem complicated at first glance, the calculations are simple. They involve simple addition and subtraction.

Here's an example of a hypothetical income statement for a newspaper business. Its revenue comes from two sources: ad sales and paid subscriptions.

This hypothetical business had more revenue in 2019 compared to 2018. But their profits were lower, because some expense items grew more than the revenue.

Apple (AAPL) is a complicated business with many different sources of revenue and expenses. Their income statement is a great way to see a simplified overview of how the business is performing.

Here's a screenshot of Apple's income statement from 2019. Apple calls its statement "consolidated statements of operations." 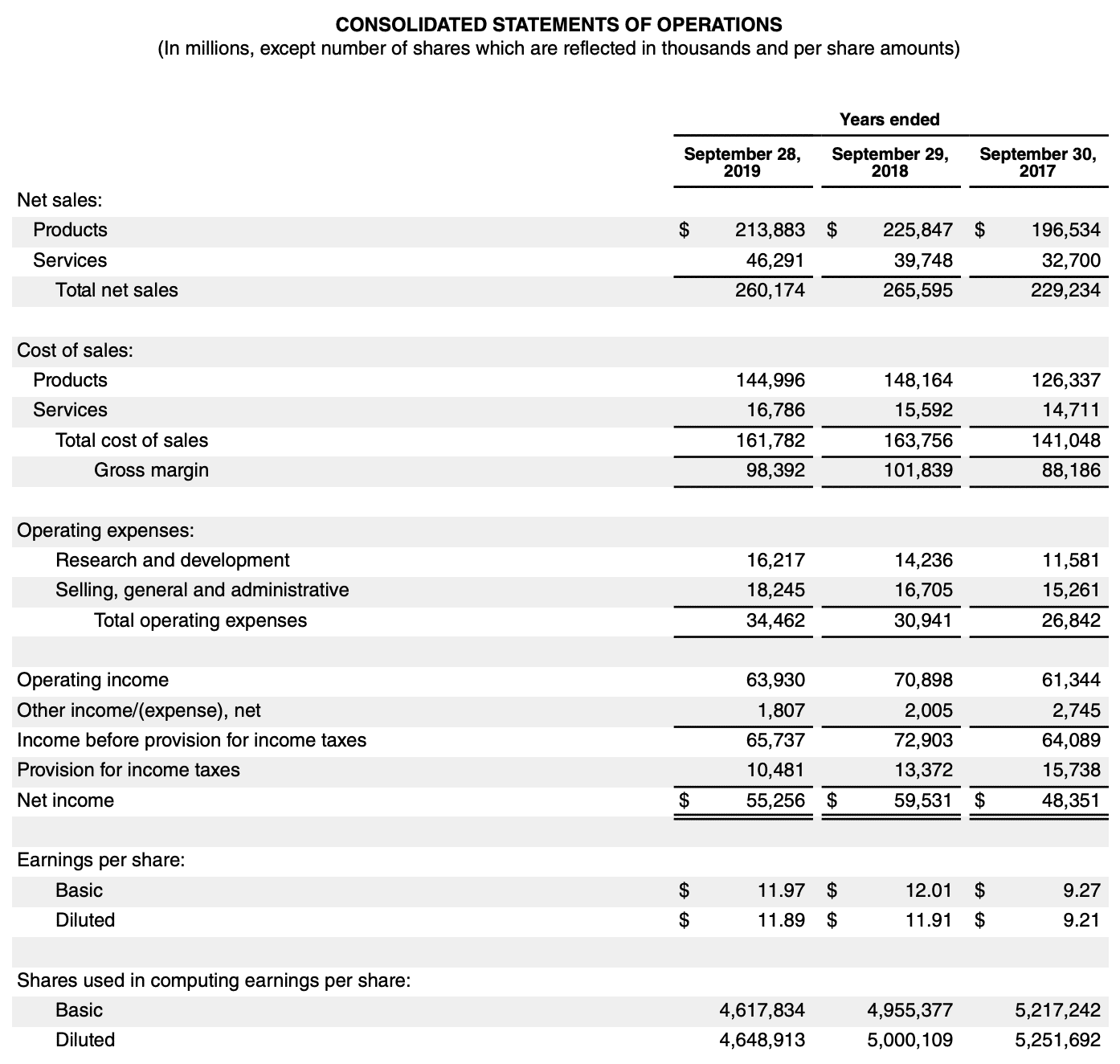 As you can see, Apple puts its revenue and the cost of revenue into two categories — products and services. Their top expenses are the cost of sales, research and development, selling, general and administrative, and taxes.

Most publicly traded companies report their expenses by function instead of by nature. For example, they put salaries under "research and development" or "selling, general and administrative" instead of having a line item specifically for salaries.

It's important to be aware of the difference between single-step and multi-step income statements.

A single-step income statement simply adds up all the revenue, then subtracts all the expenses in one step.

There are some differences between the income statements of different companies.

However, they all follow the same general structure. They start with revenue at the top and then subtract and add until arriving at the bottom line profit or loss.

Below are explanations of common components that you will see on most (but not necessarily all) income statements.

The top part of the income statement shows how revenue gets transformed into gross profit.

The three main items are:

Although it is not usually shown on the income statement, you can calculate the gross margin by dividing the gross profit by the revenue. Gross Margin = Gross Profit / Revenue.

Analysts often keep close track of the gross margin, especially for companies that have a high cost of revenue.

It's important to keep in mind that publicly traded companies in the US base their numbers on accrual-based accounting, which means that the revenue or expense has been recognized, but the cash may not have changed hands yet.

For example, a company can register revenue at the time when a product was delivered to a customer, even if the customer won't pay for it until 30 days later.

To see how actual cash flows in and out of the company's accounts, you need to look at the cash flow statement.

Next up is operating expenses, a major expense category that is often a key determinant of whether a company ends up with a profit or loss.

These are some common items to be aware of:

Interest, taxes and other gains/losses

Here are some of the most common ones:

Finally, the bottom line is calculated by subtracting taxes from the pre-tax income.

These are the most common items for the bottom-line part of the income statement:

The profit margin can be calculated by dividing the net income by the revenue. Profit Margin = Net Income / Revenue.

Companies often show shares outstanding and EPS as either "basic" or "diluted." Basic is for all currently outstanding shares, but diluted includes stock options and others that may eventually convert into common stock.

If a company sells a significant part of its business, then it will show the numbers from that part separately under discontinued operations.

Here's an example from Gamestop's (GME) income statement for 2018. They sold off a big part of their business, so many of the financials are broken down into continuing and discontinued categories. 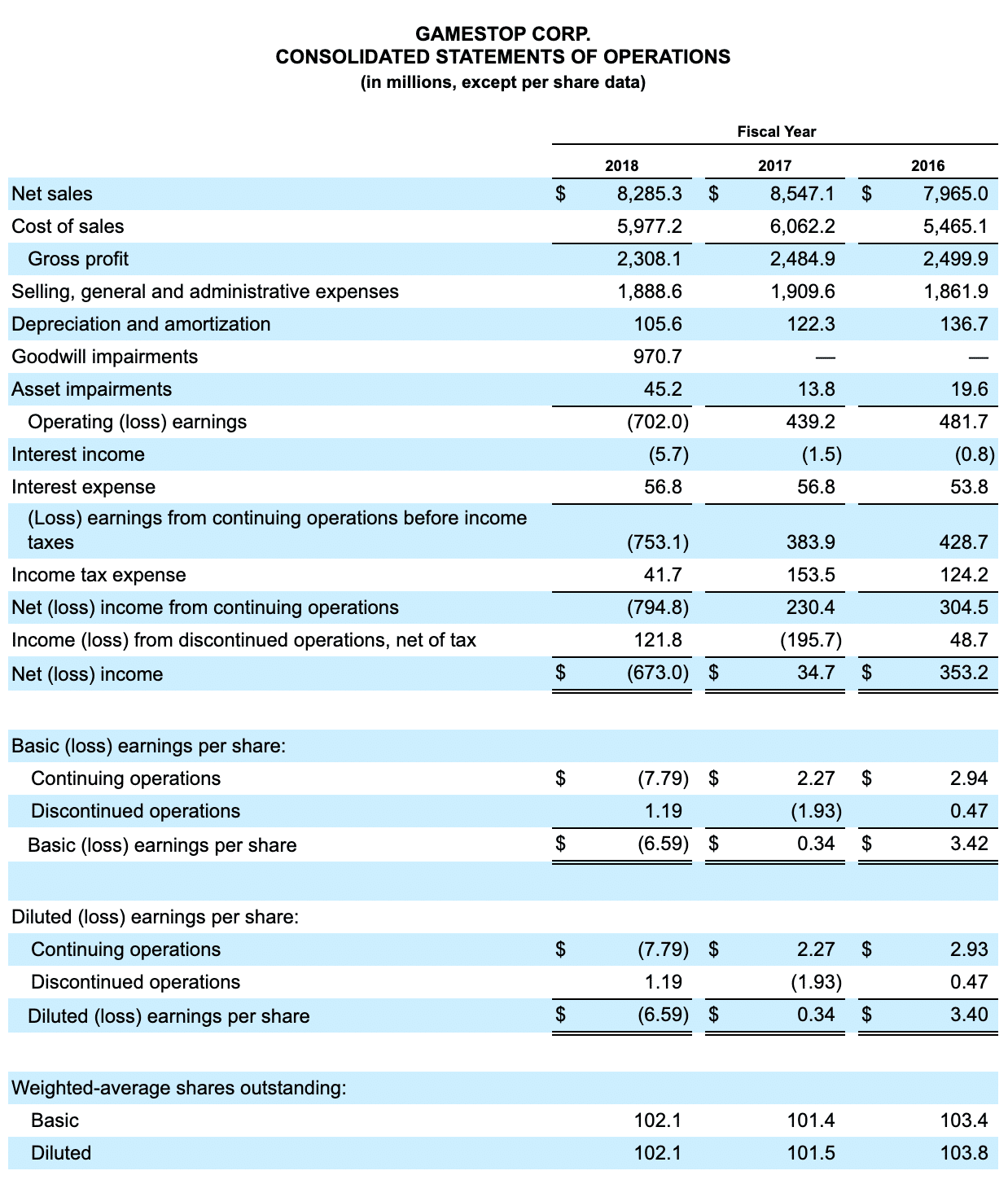 Here are some more things that are worth knowing about income statements:

Stock analysts closely follow income statements and use them for financial modeling.

Having access to income statements is very useful for stock investors because they show how the business is performing and how effective its management is.

Understanding how the income statement, balance sheet, and cash flow statement work is crucial in order to be a well-informed stock investor.

Stock Analysis Pro
Unlimited access to all our financial data with up to 30 years of history.
Stock Screener
Filter, sort and analyze all stocks to find your next investment.
Watchlists
Keep track of your favorite stocks in real-time.
Market Movers
The stocks that are making the biggest moves in the market.