The difference between revenue and income can be confusing, especially since the terms are often wrongly used interchangeably.

For a company, revenue is the total amount of money received from customers for the sales of products and services.

However, income is what remains after you subtract all costs, expenses, and taxes from the revenue. In other words, income is the same as profits and earnings.

For an individual, income is the total money earned, including salaries, tips, interest, dividends, and others. The term revenue is rarely used for individuals.

Revenue and income for a company

For a company that makes its money by selling things, the terms sales and revenue are identical and used interchangeably.

Let’s imagine a hypothetical business — a grocery store with $100,000 in sales per year.

Out of the $100,000 in revenue, this business needs to pay $40,000 per year for inventory. This includes items like foods, beverages, and toiletries.

We can calculate the income this way:

To see the calculation for a real company, here's a screenshot of Facebook's 2019 income statement, highlighting revenue at the top and net income at the bottom: 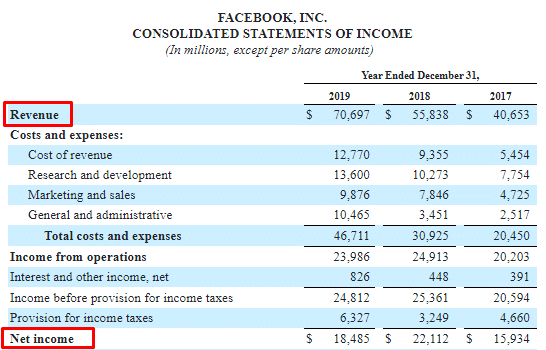 Income has a different meaning for individuals

For an individual, the term income is used instead of revenue.

As an example, let's imagine a hypothetical person with a $50,000 annual salary.

This person is also a diligent saver and rents out an apartment, collecting $5,000 in dividends per year and $20,000 in rent.

Income can also be measured on a monthly basis, as in total salary and other income earned per month.

A business has several different types of income

When investors and analysts talk about income for a company, they are usually referring to net income, also termed profits or earnings.

But there are actually several different types of income in business accounting. The main difference between them is which expense categories you subtract from the revenue number.

Here are the three most common income metrics:

Although net income is the most important, investors and analysis also pay close attention to gross profit and operating income. They can tell you a lot about how different parts of a business are performing.

The investing community often focuses even more on earnings per share (EPS), which is net income divided by the number of shares outstanding. It tells you how much money a company is making for its shareholders.

Companies can grow the net income and EPS by cutting costs, even if revenues are flat or decreasing.

Other types of income often considered include:

These are similar to net income, except they exclude a few cost items.

The percentage of revenue left as each type of income is called the margin. Commonly watched margins include the gross margin, operating margin, profit margin, EBIT margin, and EBITDA margin.

Generally speaking, when margins are improving, the company is making more money. When margins grow, stock prices tend to go up.